The D22 is a compact size pick up truck manufactured from 1997 to 2004. However, Nissan continued to... View More Info 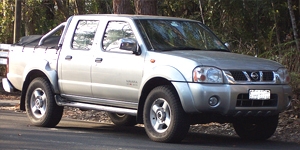 Extensive details and specifications for maintaining, servicing, repairing or rebuilding all aspects of the D22 Navara / Frontier.

The D22 is a compact size pick up truck manufactured from 1997 to 2004. However, Nissan continued to build the D22 as a cheaper alternative to the D40 in many markets. Originally planned to follow the D21 Hard Body in being designed by Nissan Design International in La Jolla, CA, design of the D22 was reluctantly given to Japan during the 1994–1995 period. This was due to NDI being busy with many design projects of for concepts and models, such as the Quest (VX54 II), Altima (L30), and Maxima (A32.5). Design of an updated D22 was eventually given to NDI in 1998.