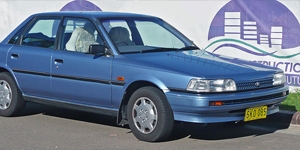 In 1987, Toyota Australia began producing these second-generation Camrys in Port Melbourne, Victoria. In fact, it was the first Camry ever made outside of Japan.

A 1.8-liter four-cylinder engine rated at 64 kilowatts (86 hp) was standard on the base model, while a twin-cam, multi-valve 2.0-liter straight-four engine and five-speed manual transmission was available on all others.

A four-speed overdrive automatic was made optional. All models bar the Ultima had a two-barrel carburettor version of the engine (3S-FC) the Ultima featured an electronic fuel-injected (EFI) version of the same (3S-FE).

Due to its positioning in the line-up, and the high import duty it attracted, it was very expensive (almost $30,000 AUD), and only sold in small numbers. In 1989, the 1.8-liter engine was dropped, and was replaced with the 2.0-liter carburettor engine, until early 1991, when the EFI version of was made standard. This was the result of the introduction of more stringent emission standards in Australia.