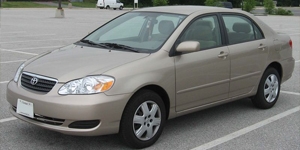 The 2ZZ-GE motor was actually developed with collaboration from Yamaha motors, and uses similar technologies found in its sibling motor the 1ZZ-FE.

The XRS was very similar to its Corolla S cousin, but the 2ZZ-GE and other structural changes set it apart. Notable features include the X-Brace, which increases structural rigidity in the rear.

The XRS also featured a sport-tuned suspension, special seats with more aggressive bolsters, and also a fixed rear seat. The standard Corolla had 60/40 split folding seats, while the XRS had none.

This was the first generation of the Corolla to be available in Mexico, and was offered in 3 trim levels: the base CE, the mid-range LE and S, the latter only available with a manual transmission.