The Daewoo Leganza is a mid-size sedan produced by the former Daewoo Motors in South Korea between 1... View More Info 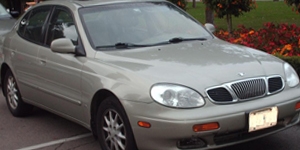 The Daewoo Leganza is a mid-size sedan produced by the former Daewoo Motors in South Korea between 1997 and 2002. Its internal development name was V100, under which it and its platform (not directly shared with any other model) are also known.

Daewoo explained that the name Leganza originated from the combination of two Italian words - elegante (elegant) and forza (power). The Leganza was styled by the famous Italian designer Giorgetto Giugiaro of Italdesign.

The Leganza was a front-wheel drive car, available with a four-door sedan body only. The Leganza was powered by Holden-sourced E-TEC II DOHC 16V I4 engines (two displacements were made using the same block and bore, differing in stroke) with either a 5-speed manual transmission, or a 4-speed automatic.