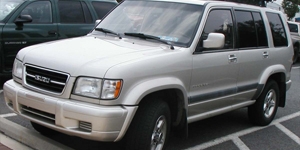 Beginning in 1998, Isuzu Troopers in the US were equipped with a DOHC 3.5 L engine producing 215 hp (160 kW; 218 PS). European and Asian buyers could opt for the diesel engine option of the 4JG2 3.1 L (later superseded by the more problematic 4JX1 3.0 L of 159 PS/117 kW). A Borg-Warner torque-on-demand all-wheel-drive system was introduced, along with freshened styling. The grille was redesigned again for the 2000 model year.

Transmission options included a five-speed manual transmission, the Aisin AR5 and the electronically controlled 4L30E four-speed automatic. The 4l30E was fitted with both a "power" shift feature allowing the gearbox to take better advantage of the engine's power by adjusting the shifting nature and a "winter" mode permitting third gear starts for added stability in slippery conditions. The 2000 to 2002 Trooper included a feature called "Grade Logic" which allowed the transmission to automatically downshift on steep grades in order to slow the vehicle down.