The Ford BA Falcon is a full-size car, produced by the Ford Motor Company of Australia between Septe... View More Info 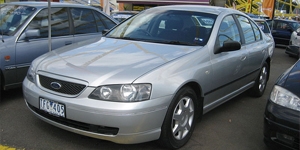 The Ford BA Falcon is a full-size car, produced by the Ford Motor Company of Australia between September 2002 and October 2005.

The exterior styling of the BA was a substantial revision of that used for the preceding AU model.

A new independent rear suspension setup was fitted to all sedan derivatives, and the engine and transmission received further upgrades.

In late 2004, Ford introduced a Mark II update, bringing subtle styling and mechanical changes, and twelve months after that, replaced the BA with the BF.

Powerplants consisted of both straight-sixes and V8s, with the entry-level Barra 182 six-cylinder being a significant improvement over the AU Falcon's six, with a gain of 25 kilowatts (34 hp) of power for a total of 182 kilowatts (244 hp).

The 156-kilowatt (209 hp) LPG-only Barra E-Gas engine was offered as an option on lower specification models. LPG-powered variants of the BA range are commonly used as taxis throughout Australia.

A turbocharged variant of the Barra engine was introduced in a new XR6 Turbo model and produced 240 kilowatts (320 hp) of power.