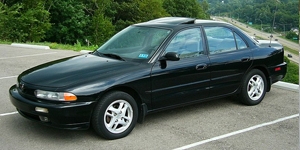 The seventh generation Galant debuted in 1992 (model year 1994 in America), available as a four-door sedan and five-door liftback (sedan only in America). A Japan-only hardtop derivative called the "Emeraude" (French for emerald) was also launched in 1992. This generation marked a substantial change in suspension design. The front switched from struts to a multi-link structure featuring two lower arms and one upper arm. The rear switched from a beam axle to a newly designed multi-link system.

Production in the United States began on May 24, 1993 when the first seventh generation Galant rolled off the assembly line in Normal, Illinois. In 1994, a slightly upgraded GS version was available with a 160 hp (120 kW) twin cam engine, speed-sensitive steering, rear stabilizer bar, and an available manual transmission.

The seventh generation Galant, also known as the Mitsubishi Eterna, formed the basis of the Proton Perdana.