The introduction of the Legacy was a notable departure from Subaru products in the past. The Legacy ... View More Info 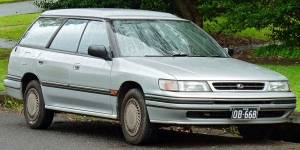 The introduction of the Legacy was a notable departure from Subaru products in the past. The Legacy was formally released January 23, 1989 in Japan, with an introductory price of 2,550,000 JPY for the turbocharged RS (approx. USD $18,800 at 1989 yen exchange rate). The first Legacy was available at Japanese dealerships on February 1, 1989, with worldwide distribution starting in 1990.

International versions of the Legacy turbo were offered the DOHC 2.0 liter engine with a water-cooled intercooler starting with 1991, with a manual transmission only in the RS and RS-RA version, the GT version was available with an automatic transmission.

The USA-spec EJ22T SOHC 2.2 liter 163 bhp (122 kW / 165 PS) turbo was not offered the water-cooled intercooler when it was introduced to them in 1991, and was available with either a manual or automatic transmission.