In 2001, the Impreza line received a complete update. The chassis received a 120% increase in torsio... View More Info 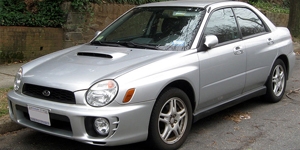 In 2001, the Impreza line received a complete update. The chassis received a 120% increase in torsional stiffness. The version nomenclature was dropped from the name, though Japan, New Zealand and Australia still refer to them as versions 7, 8, 9 and 10.

To distinguish between the years, Japanese and other auto-enthusiasts often refer to the chassis as GDA (the WRX had an 'A' whereas the STi had a 'B') revision A to G where G is the current (2007) version. The wagon chassis is given a GGA code.

The WRX has received two styling updates. The exterior "bug eyed" styling was widely regarded as unattractive, so Subaru introduced a mild facelift (called "blob eye") of the front end in the 2002 Paris Auto Show.

A third update was introduced in mid-2005, including the performance models, with the controversial "jet intake and wings" grille first debuted on the Subaru R1 kei car, along with new headlights (referred to as 'hawk eyes'), taillights, and bumpers.

Subaru states that they chose this style to go back to their heritage, paying homage to their grandfathered company, the Nakajima Aircraft Company.