The AE86 generation of the Toyota Corolla Levin and Toyota Sprinter Trueno is a small, lightweight c... View More Info 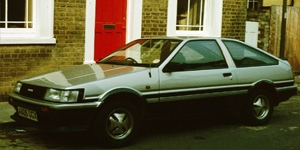 Engine Workshop Manual for Toyota 4AGE engine, complete guide to replacing, repairing or rebuilding any part of the engine.

The AE86 generation of the Toyota Corolla Levin and Toyota Sprinter Trueno is a small, lightweight coupe introduced by Toyota in 1983 as part of the fifth generation Toyota Corolla lineup. For the purpose of brevity, the insider-chassis code of "AE86" is used to describe the whole range.

The Levin has fixed-headlights and the Trueno has retractable headlights. The export model name Corolla covers both variations. The AE86 (along with the lower spec 1,452 cubic centimetres (1.452 L) AE85 and 1587 cc SR5 versions) was rear wheel drive (unlike the front wheel drive CE80, EE80 and AE82 models), and is among the last rear-drive cars of its type, at a time when most passenger cars were being switched to front-drive.

In 1987, there was a limited edition model of the AE86 called "Black Limited" that served as a send-off model before the AE86 chassis was replaced later that year by the front wheel drive AE92 Corolla/Sprinter range. In Japan, the AE86 was also known as the Hachi-Roku, Japanese for "eight-six".