In May 1986, Toyota was ready to release its next version of the Supra. The bonds between the Celica... View More Info 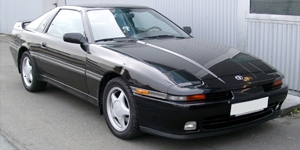 In May 1986, Toyota was ready to release its next version of the Supra. The bonds between the Celica and the Supra were cut, they were now two completely different models.

The Celica changed to front-wheel drive, while the Supra kept its rear-wheel-drive platform. Though the Mark II and Mark III had similar designs, the engine was updated to a more powerful 3.0 200 hp (149 kW) inline 6. Although only available in naturally aspirated trim in 1986, a turbocharged version of the engine was introduced in the 1987 model year.

The Supra was now related mechanically to the Toyota Soarer for the Japanese market.

The new Mark III Supra engine, the Toyota 7M-GE, was the flagship engine of Toyota's arsenal. Both versions of the engine contained 4 valves per cylinder and dual overhead cams. The turbocharged 7M-GTE engine was Toyota's first distributor-less engine offered in the US which used coil packs sitting on the cam covers and a cam position sensor driven by the exhaust camshaft.