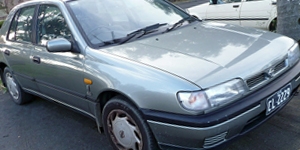 Articles for the Nissan Pulsar / Almera

The Nissan N14 Pulsar was an excellent little car for it's time, available in 3 body types, the 3 door hatch, 5 door hatch and 4 door sedan along with 2 main engine types, the 1.6 litre GA16DE and the 2.0 litre SR20DE, the GTI-R model was equipped with a GTR inspired SR20DET setup, with a large turbocharger and also quad throttle bodies. All models were available in automatic and 5 speed manual transmissions (Except GTI-R, this was solely manual).

The GTI-R was created in an attempt to take on the world rally championship, however rules were changed shortly after the car was released, quickly ending Nissans hopes for a GTI-R world rally title.

The general N14 range was a large success, mainly due to it's reliability, low cost in terms of maintenance and low fuel consumption. The car quickly won over the public and slowly started to draw customers away from larger vehicles. Once production stopped, the vehicles value became fairly well priced in the second hand market, lending itself as a popular choice for young drivers to which it's initial reasons of success were highly valued.

Over the years of dealing with this car, it is rare to find any common major mechanical problems, they hold together incredibly well and are a testament to the quality of Nissan vehicles in the early 90's. The problems that do arise are mostly due to their age, these being alternators, starter motors, clutch cables, worn clutch plates, electrical relays and electrical signal problems.

As with most front wheel drive vehicles, the gearboxes can be damaged if the vehicle is driven beyond the designed limits, in other words, they are prone to fail upon driver abuse, but this level of abuse to cause a failure is normally extreme.

With regards to the GTI-R gearboxes, this is another matter all together. They were an entirely different design to the front wheel drive models and are commonly known to fail even following minor abuse. Almost all blown gearboxes in the GTI-R that I dealt with were reported to have failed after releasing the clutch at full RPM. From my experience I have also found most GTI-R owners tend to keep a second gearbox in good condition at home so they can easily replace their current gearbox when it's lifetime has ended.

Aside from the GTI-R gearboxes, there is very little to fault with these cars, apart from the fact they are now commonly very high in miles due to their age, even so most with an average maintenance history will commonly exceed 200,000 miles (320,000+ kms) in their lifetime. Well maintained vehicles are known to commonly exceed 250,000 miles (400,000+ kms).

Their final demise is mostly due to something we call "blow-by", where the rings have worn and a gap widens between the piston and the cylinder, causing excessive pressure in the crank case, this is commonly noticed by oil being pushed out of the engine through the dipstick or PCV valve. In some cases the engine will also release smoke with a blue haze from the exhaust system, as the oil is pushed past the rings into the cylinder which is then ignited.

Before deciding your cars lifetime is up, you have to also realise some causes of blow by can be treated, always begin by doing a cylinder compression test.

The car must be at operation temperature for this test, working on hot cars is a risk, you can easily be burnt (mostly by contact with the exhaust manifold, top of the radiator or oil that has recently leaked out from the engine), have patience and don't try to rush things as this is normally when burns occur.

NOTE: before beginning a compression test, remove ALL the spark plugs leads from the cylinders so the engine can not start, I normally label each one with a small amount of masking tape and a permanent marker as they are removed, as this makes fitting them after the test much easier. I'll repeat again, make sure the engine can not start before commencing the test.

If the compression test comes back normal, it may be that you have been driving the car with a misfire for some time, either by old spark plugs that need replacing, or spark plugs with an incorrect gap (most spark plugs these days come pre-gapped, so this is not such a problem as before). Another cause can be faulty injectors which release too much petrol into the cylinder. In all these cases, because an excess of fuel is present this can build up and drain off past the piston rings into the crank case. In these instances you must replace the oil and oil filter straight away, then fit brand new spark plugs and new spark leads.

If the problem is an injector, then you may still notice a misfire after doing this and will need to check the injectors for any signs of leakage, if you can not locate leakage on the outside then it may be necessary to remove the injectors, keeping in mind that removing injectors which have been seated for a long time may cause damage to the seals and make the leak worse. Always consult the manual before and during the removal of injectors to understand the full nature of this system.

If the compression test comes back too low in one or more cylinders, then the only solution for these problems is a replacement or rebuild of the engine, the engine may continue to run even on low compression, however you will further contaminate your oil, burn excessive fuel, loose engine power and could possibly run into trouble should you be subjected to an automotive emissions test.