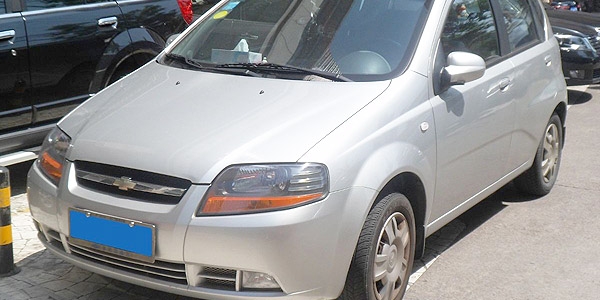 The Chevrolet Aveo (T200) is the first generation of the Chevrolet Aveo, a subcompact automobile from the Chevrolet division of the American manufacturer General Motors, launched in 2002, developed by the initially independent South Korean manufacturer Daewoo, later GM Korea. It was originally marketed as the Daewoo Kalos and prominently marketed as the Aveo. The model received the T200 internal codes during the car's development. The T250 code was designated for the model's facelift.

Designed, engineered and originally marketed by GM Daewoo, the Aveo superseded the Daewoo Lanos and was marketed worldwide in 120 countries under seven brands (Chevrolet, Daewoo, Holden, Pontiac, Ravon, Suzuki and ZAZ). In its home market of South Korea, the T200 was known as Daewoo Kalos, before being rebranded Daewoo Gentra. In several Asian, Australasian, and European export markets, the "Daewoo Kalos" name was also used, only to be later renamed "Chevrolet Aveo" or Holden Barina in the case of Australasia. Other names used include ZAZ Vida in Ukraine, Ravon Nexia in Russia, Chevrolet Nexia in Uzbekistan, Chevrolet Lova in China and Pontiac G3 in the United States, selling alongside the "Chevrolet Aveo" version.

In Canada, the name Pontiac Wave was originally used, followed by Pontiac G3 Wave, before adopting the "Pontiac G3" name used in the United States. Since 2003, Suzuki has also sold a version in Canada as the Suzuki Swift+ alongs