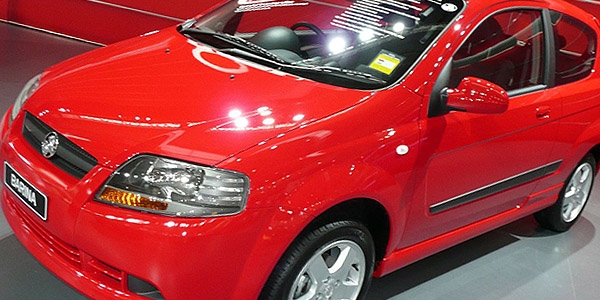 In December 2005, Holden dropped the Opel-sourced Barina and rebadged the Daewoo Kalos hatchback as the fifth generation TK Barina. In February 2006, a four-door sedan went on sale, the first sedan type for the Barina nameplate. It is also equipped with a 1.6-litre twin-cam 16-valve F16D3 Daewoo inline-four engine. The decision to use the Daewoo Kalos as a basis for the car was made to ensure Holden remained highly competitive in the fast-growing small car market in Australia, facing fierce competition from other South Korean-sourced models like the Hyundai Getz. The Opel-sourced model sold at a large loss and was sold to build up a presence in the entry-level new car market in Australia. The Holden Barina was sold in single specification, starting at A$12,990 for the 3-door, which was later changed to A$13,490.

The Daewoo-sourced Holden Barina scored a lower two out of five star ANCAP rating than its European-built, Opel-based predecessor. Criticism was focused on the 2006 Barina TK sedan because of these crash test results, one of the worst in recorded history. As a result, Denny Mooney, the managing director of Holden, was forced to publicly defend the perceived poor reputation of the TK Barina.