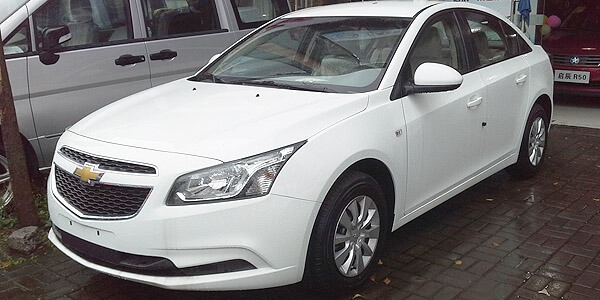 In 2008, GM introduced the Cruze compact car, carrying the "J300" internal designation. This J300 iteration serves as a replacement for the Chevrolet Cobalt, Daewoo Lacetti and Holden Astra—all unrelated cars. GM phased out production of the Cobalt and its badge engineered counterpart, the Pontiac G5 in 2010, just prior to the manufacturing of the Chevrolet Cruze was to commence. The first renderings of the Cruze were revealed by GM at a press conference on July 15, 2008, with the first official images released on August 21, 2008.

Cruze production sites include Gunsan, Jeonbuk, South Korea; Saint Petersburg, Russia; Shenyang, China; and Halol, India; Hanoi, Vietnam since April 2010 in complete knock-down (CKD) form, Ust-Kamenogorsk, Kazakhstan from May 2010; Rayong, Thailand after December 2010, and São Caetano do Sul, Brazil from 2011. Holden's localized hatchback version of the Cruze built at the Elizabeth, South Australia factory from late 2011 joined the Cruze sedan manufactured there since March 2011. GM in the United States has upgraded the existing plant in Lordstown, Ohio to manufacture the Cruze, investing more than US$350 million. At the ceremony of the start of production of Cruze at Ohio, Mark Reuss, the president of GM's North American operations said, "This is everything for us". It is described as GM's most significant new vehicle introduction into North America since the Chapter 11 reorganization in 2009, and