In June 1993, Renault purchased production tooling for the X64, with the first test unit being assem... View More Info 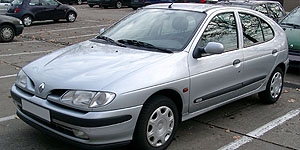 Factory service manual for the Renault Megane / MÃ©gane built between 1995 and 2002. Covers all repair, maintenance and troubleshooting / diagnostics information for all aspects of the vehicle. Perfect for all repairs, maintenance, servicing and troubleshooting. Covers engine, gearbox, chassis components, electrical system and other areas related to servicing of the vehicle.

In June 1993, Renault purchased production tooling for the X64, with the first test unit being assembled at the Douai plant in October 1994, and pre production units being constructed from December 1994 to the middle of 1995.

The Mégane I was unveiled in September 1995, at the Frankfurt Motor Show, as a replacement for the Renault 19. The car was essentially a reskin of its predecessor, and carried over the 19's floorpan, engines, transmissions and chassis design, albeit with much modification.

Taking its name from a Renault concept car shown in 1988, the Mégane further developed the new corporate styling theme introduced by Patrick Le Quément on the Laguna, most notably the "bird beak" front grille – a styling cue borrowed from the Renault 16 of the 1960s.