With development underway from 1987, design work under Patrick Le Quement began in 1988, with a fina... View More Info 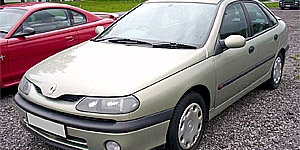 A collection of factory workshop manuals for the Renault Laguna 1 / Laguna I vehicles produced between 1994 and 2001. Covers V6 engine, maintenance, servicing, Diesel engine components and a range of other repairs and maintenance information.

With development underway from 1987, design work under Patrick Le Quement began in 1988, with a final design approval in March 1989, and design freeze by the beginning 1990. Road testing commenced in 1991, and continued throughout 1992 to 1993. The first generation Renault Laguna was unveiled in November 1993 and launched in January 1994, as a replacement for the Renault 21, initially coming as a hatchback only.

In September 1995, at the Frankfurt Motor Show, an estate version was introduced. This was known in some markets as the Laguna Sports Tourer, and replaced the 21 based Renault Savanna/Nevada. It was initially launched as a 1.8 RN/RT, 2.0RT/RXE and 3.0V6. A sports pack with deep front spoiler, rear spoiler and alloy wheels was available on 2.0 versions. This coincided with Renault's participation in European Touring car championships.

The Laguna's equipment levels were generally much higher than the Renault 21. From launch, all models came with power steering, electric front windows, and remote central locking as standard. Most of the range had a driver's airbag. Later twin airbags, anti-lock braking system, air-conditioning, and a CD player became either optional extras or standard equipment. It was given a minor update in 1996 which included a new Laguna nameplate at the rear.