The Isuzu Elf is a medium duty truck produced by Isuzu since 1959. Outside Japan it is known as N-se... View More Info 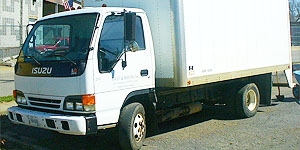 The Isuzu Elf is a medium duty truck produced by Isuzu since 1959. Outside Japan it is known as N-series. The range was originally mainly available in Japan and other Asian countries. Australia was another important market for the Elf and N-Series - to the extent that it was manufactured there from the 1970s using many local components. Since the early 1980s, it has also been sold and built in the United States (under the Chevrolet and GMC brand as a W-Series), and also as the Isuzu N-series. North America only receives the wide-cab version.

For the common Andinian market (including Chile and Peru), the truck has been assembled in the GM-Colmotores assembling plant in Bogotá, Colombia since 1991, with annual quantities already of 20,000 up to 60,000 units. Local assembly has been increasing because of increasing demand in the Colombian and neighboring markets. It carries "Tecnología Isuzu" (with Isuzu Technology) lettering.