In 1995, the Holden Astra name was used again, this time in New Zealand for a model based on the Ope... View More Info 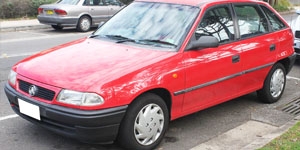 In 1995, the Holden Astra name was used again, this time in New Zealand for a model based on the Opel Astra F, Opel being the General Motors subsidiary in Germany. Imported from Vauxhall's Ellesmere Port plant in the UK, this third-generation Astra model and was sold as a four-door sedan, five-door hatchback and five-door wagon.

Holden in Australia did not sell the Opel-based Astra, known as the TR series, until September 1996, after the dissolution of Australian Government Button car plan. This resulted in the collapse of UAAI, the Holden-Toyota alliance, and as result Holden opted to return to marketing rebadged General Motors vehicles. Between 1989 and 1996, the Astra's role was fulfilled by the Nova, Holden's version of Toyota's Corolla (E90 and E100). Unlike New Zealand, the wagon was not offered.

During this period of badge engineering in Australia, General Motors New Zealand had used Opel as one of its main marques alongside Holden and Isuzu. Because the Button plan or local equivalent never existed in New Zealand, the two initial generations of Holden Astra (LB/LC and LD) were thus never available in that market.