The second-generation K11 was built in the UK and launched in Japan in early 1992, and released in E... View More Info 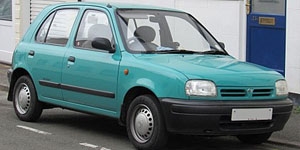 The second-generation K11 was built in the UK and launched in Japan in early 1992, and released in Europe in the fourth quarter of the year. It was powered by brand new all-aluminium 1.0 L (CG10DE) and 1.3 L (CG13DE) DOHC 16-valve engines, with 55 PS DIN (40 kW/54 hp) and 75 PS (55 kW/75 bhp) respectively (higher outputs were claimed in Japan, according to the JIS rather than DIN/ECE rating), both with ECCS (Electronic Concentrated Control System) fuel injection. It was the second Nissan model line to be produced in the UK at the Nissan Motor Manufacturing UK (NMUK) plant, Washington Tyne and Wear. A diesel version was offered with the 1.5 L PSA TUD market in Europe as Micra 1.5 D. CVT automatic transmission and Power steering was an option on some models, and the equipment list included safety features not usually available in this market segment: a toughened safety-cage and side-impact door beams were standard and pre-tensioning seat-belts and a driver's air-bag were optional. However, the Mk2 Micra scored only a modest two stars in Euro NCAP testing in 1997. Airbags, antilock brakes, electric windows, central locking and air conditioning were as either standard equipment or options on some models in the Micra range. The European model range consisted of 1.0L and LX, 1.3LX, SLX and Super S. The car soon won the European Car of the Year award for 1993 (the first Japanese car to do so) and the Good Design Award (a Trade and Industry Design award in Japan) along with the