The Tribute made its debut at the 2000 Los Angeles Auto Show as a compact crossover SUV, a segment p... View More Info 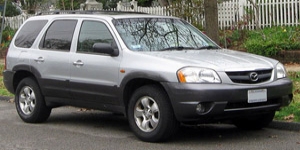 The Tribute made its debut at the 2000 Los Angeles Auto Show as a compact crossover SUV, a segment pioneered by the Toyota RAV4 in 1994. Its conservative styling resembled and eventually somewhat replaced the Mazda Navajo, a rebadged 2-dr Ford Explorer which was retired in 1994. In Japan, Mazda had an SUV called the Mazda Proceed Levante, a rebadged Suzuki Escudo, but the Tribute was Mazda's first original SUV. The Ford plant in Claycomo, Missouri assembled Tribute for the North American market, alongside Ford Escape. The Mazda plant in Hofu, Japan and the Ford Lio Ho plant in Taiwan assembled Tribute for their respective markets. The 2001–2006 Mazda Tribute was available as front- or four-wheel drive and featured plain-looking but comfortable roomy interior, decent handling and car-like ride.