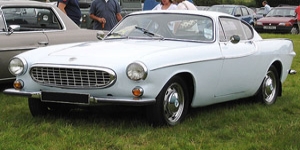 While the P1800 was more of a stylish touring car rather than a sports car when it came to its speed capabilities, the P1800 first became popular when it was featured as the main car driven by Roger Moore in the hit television series The Saint which aired from 1962-1969. The P1800 featured styling by Pietro Frua and mechanicals derived from Volvo's Amazon/122 series.