The Daewoo Lanos is a subcompact car manufactured by the Korean automaker Daewoo Motor from 1997 to ... View More Info 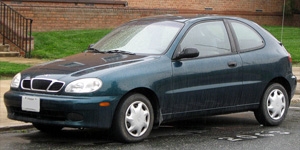 Workshop Manual for the Daewoo Lanos, covers all aspects of the vehicle including driveline, chassis, interior and electrical. Diagrams and instructions range from servicing and general maintenance to repairs, assembly and rebuild information.

The Daewoo Lanos is a subcompact car manufactured by the Korean automaker Daewoo Motor from 1997 to 2002.

The four models available were S, SE, SE Plus, SX, and later, the SPORT model. The S was the base model and did not include many standard features (like a CD player or power windows). The SE was just a small step up from the S base model. However, the SX model usually included a CD, radio, and cassette player along with power windows, a power side mirror and fog lights. A few select SX models even came with a sun-roof though not many did. In the later years, the SE and SX models were dropped and replaced with a new trim line called the SPORT (2001-2002). The SPORT included several features similar to the SX, but also included red/black leather seats, and a metallic silver dash trim. Also, the SPORT model had window controls located on the doors rather than the center console (like in the previous trim lines).